The Campaign from Texas to Maryland
Rev. Nicholas A. Davis
Presbyterian Committee of Publications of the Confederate States, 1863


...March 13 [1862]—A detail was made from each Texas Regiment of one Lieutenant and fifteen men, who were ordered to return to the vicinity of Dumfries, to watch the movements of the enemy. They captured prisoners daily, and on the 18th, at Glasscock’s Hill, they saw a brigade cross the Potomac, pass up to Dumfries, back to Evansport, and recross the river. On the next day they captured a Yankee Chinaman, who being committed to the care of Barker, (of Co. G, 4th Texas,) and proving a little stubborn, that practical frontiersman quietly placed the Celestial across his lap, and with his leathern belt administered such a chastisement as that “ruthless invader” had probably not received since childhood.

On Monday, a small party of Federals came to Dr. —’s house in the upper part of Stafford, and after getting something to eat left. Soon after leaving, they overtook a cart of the Dr’s loaded with bacon, which he was sending off. They seized this, together with the cart and horse, as booty, but the negro boy who was driving escaped.

After this party had left Dr. —’s, he was surprised by the sudden appearance before him, in his room, of a Federal soldier, a picket, armed with a musket, who called out — “You are my prisoner!” The Dr. sprang at the man and wrested the gun from his hand, coolly answering — “No, sir, you are my prisoner.” The Dr. started the fellow before him, but before they had gone far, the soldier said he would go no further. Dr. — told him he would shoot him if he did not, but the fellow said he would as soon be as be taken prisoner. Fortunately at this juncture some of our scouts came in sight, and the prisoner [didn’t] seem to be at all disposed to die, as the Texans were willing to accommodate him. He was forwarded to Richmond on Wednesday.

The fellow is a Chinaman; so if seems the United States are hiring of all nations their refuse people, to subjugate the independent people of the South. 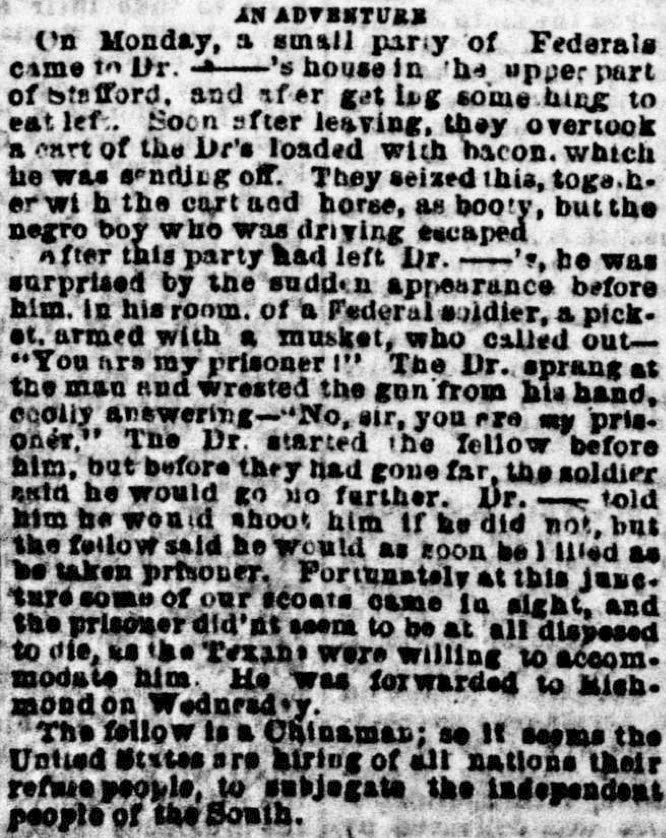 Early research at the Association to commemorate the Chinese serving in the American Civil War believed that the unnamed Chinese soldier was John Tomney. Further research in Asians and Pacific Islanders and the Civil War confirmed that it was John Tomney.

Did these three words refer to the captured John Tomney?


Tomney is profiled in the National Park Service book, Asians and Pacific Islanders and the Civil War.